FIND OUT TODAY HOW WE CAN HELP

// Request for a Demo Banner

Understanding the Condominium Concept: An Insightful Guide to the Strata Property Act 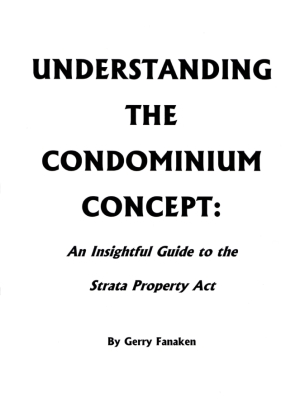 Unlike other books on the market this informative guidebook addresses the subject in three ways:

Gerry Fanaken has over the years written hundreds of articles on strata administration and several guidebooks.

Since that time, there have been amendments to the legislation, many court decisions and new interpretations of the legislative requirements.

His new book delves into all aspects. It is written for use by strata councils, property managers, students in property management courses, condo owners, and the general public.

Although it is not a legal textbook, lawyers and notaries will find useful comments and practical advice that may assist them in fulfilling their professional obligations when the need arises.

If you are interested getting a copy of the book, you can directly contact Gerry via his email at gfanaken@shaw.ca.

Gerry Fanaken has been a condominium owner since 1974, in a Vancouver westend highrise of 115 strata lots. He has been a council member and President for many years during this period.

Mr. Fanaken was, from 1980 to March 31, 2011 the Chief Executive Officer of Vancouver Condominium Services Ltd. (“VCS”), one of the largest and most prestigious strata management firms in B.C., managing about 165 strata corporations.

In addition to dozens of educational bulletins which were published monthly and available on the VCS website, Mr. Fanaken wrote numerous guidebooks on strata corporation administration.

The Provincial Government and some of its crown corporations and ministry departments have, from time to time, called upon Mr. Fanaken for advice and direction with respect to strata corporation matters. These have included the Ministry of Finance and The Financial Institutions Commission.

Mr. Fanaken assisted the Real Estate Council of British Columbia with the development of regulations, policies and practices in respect of the licensing of Strata Property Agents which became effective January 1, 2006.

Mr. Fanaken has been a guest speaker at various functions organized by groups dealing with condominium issues including The Continuing Legal Education Society of B.C. and The Insurance Institute of B.C.

Mr. Fanaken is a graduate of the Ryerson Polytechnical Institute (Toronto) in Business Administration (1966).